Friends! The new album is finally done! Featuring 10 tracks; 4 of which you may have already heard, and 6 brand new tracks. Pre-save "Geography" to your Spotify account now!

Happy 2021, friends around the world!

I hope the new year has started well for all of you, and that you're happy, safe, and healthy!

I sure miss singing live in front of an actual crowd IRL! But, here's something that's almost just as good! I livestream several times per week on Sessions Live, an amazing app just for livestreaming. It's free to join, but if you choose to send tips (or "love", as it's called on Sessions) that's totally up to you. You can request songs, join my Purple Crew and just by listening and tapping the stars, you can help me climb up the leaderboard and yeah, help me earn more money. (Earning any money singing these days is pretty amazing, just saying.) You can find my Sessions Live profile here: https://sessionslive.com/AnnMarita/ or download the Sessions Live app.

Find my streaming times in the above image!

Peace and joy, everyone!

Season's Greetings, friends around the world!

Ann-Marita's brand new original Christmas single is now available! This is a holiday love song, about appreciating the little things—which are actually not so little after all. We're hoping this song will find its way into people's hearts and homes this holiday season, and spread some cheer and love around the globe. Check out the YouTube lyric video, or listen on Spotify, Amazon, or Bandcamp.

I'm so excited about this one. My new single, "The Ragged End of Your Rope" has been released.

A few weeks ago, I asked friends, family, and fans around the world to send me photos that encompass their day-to-day lives in 2020, navigating through the radical changes we've all been experiencing. I put the photos together in a 2020-style music video for "The Ragged End of Your Rope". Please take a few minutes to watch the video, and give it a thumbs up if you feel so inclined.

Thank you all, thank you to those of you who submitted photos, and be safe, be well!

This is a big day! My new video for "Easy Enough" is out, shot guerrilla style in Downtown Los Angeles just a couple of weeks ago, directed by Paul Maldonado. We crashed an actual movie set, we invaded a shopping center with the camera camouflaged as a shopping bag, we almost got run over at least half a dozen times, but we made it. If you like the video, please click the "thumbs up", 'cause it really helps! Thank you all!

Hi friends, near and far!
I have some exciting news I want to share with you all. And I'll keep it short and sweet!
The new album is coming! About 65 % there, to be precise. But you can check out the first two singles  "Fortymile" and "Swede Hollow" on any digital download or streaming service right now!
Any Central California peeps out there? I'll be back to perform in Morro Bay and San Luis Obispo in just a couple of weeks! October 8th in Morro Bay will be a beautiful tribute show to one of the most soulful country artists of our time; Kathy Mattea. October 9th I'm the featured artist for Songwriters At Play at The Mark in San Luis Obispo.
But before that! Until North, The country/Americana band I've been singing and performing with while I've been in Sweden (yes, Sweden!) is one of three nominated bands in the Pure Country category at this year's Country SM. (That's the Swedish Country Music Championship in case you're wondering.) The biggest Swedish country music event of the year, and you can read all about it here. (If you speak Swedish, that is.) It's all happening this coming weekend, so please keep your fingers crossed for us and send us some good vibes wherever you may be. And if you happen to be at Country SM, well, then please say hi!
Until next time,
Peace & joy,

There's new music from Ann-Marita! The brand new single "Fortymile" is now available from any digital outlet near you! Spotify, iTunes, YouTube, whichever you may prefer - you can probably find it there.

This song is based on a true story from the Alaskan gold rush era, where a young, delinquent stage actress was being smuggled across the border from Canada to Alaska by her suitor, to escape the Canadian police.

Please show your support by giving it a spin, a like, a thumbs up! It be greatly appreciated!

Ann-Marita proudly joins the roster of Journey Instruments Sponsored Artists! The announcement was made on May 10, 2018, and you can read – and watch – all about it here! 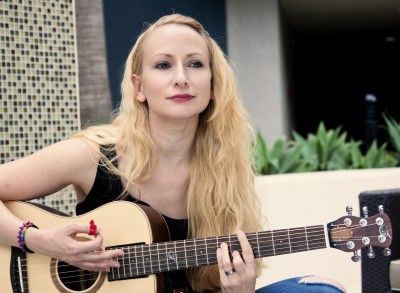 Spring has sprung! At least for those of us in the Northern Hemisphere. And new music from Ann-Marita is on the way. The first few tracks are being mixed as we speak, so stay tuned! The release date for the first single will be announced very soon! 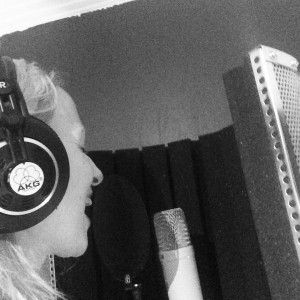 In the meantime, Ann-Marita has several upcoming shows in Southern California, including a special Sons of Norway event in Long Beach on April 14th, the David Harvey Presents singer/songwriter showcase at the Coffee Gallery Backstage on April 19th, and the annual Scandinavian Festival of Southern California in Thousand Oaks on April 22nd. For this year's Scan Fest, Ann-Marita will be accompanied by Brendan Coyle on piano, performing two sets starting at 1 pm. This is an all ages show, and no, it's not just for Scandinavian people! (So if you're not a fan of herring, you can have a hot dog. Or shaved ice. Just saying.)

After a successful stint of shows and workshops in Alaska last summer, Ann-Marita has been asked to return to the OTHER Land of the Midnight Sun in July 2018. Dates and locations will be announced soon. In the meantime, check out a few photos from 2017!

Another bit of awesome news: Ann-Marita is now proudly endorsed by Journey Instruments! There will be a special video announcement on Ann-Marita's YouTube channel in the next month, so please subscribe for updates!

We thank you all for your continued support! If anyone's interested in booking Ann-Marita (for a living room concert, workshop, festival, Scandinavian-themed event, you name it!), please don't hesitate to send a message from the contact page.

Have a beautiful day! Peace and joy!

This is what you may call a world tour...!

It's gearing up to be an eventful summer! In a couple of weeks, Ann-Marita will be returning to her home town in Norway, Hellesylt, to perform at the 30th anniversary of their festival Hellesyltdagane.

From there, her travels will take her via Los Angeles, CA to Alaska, where she will be a featured guest artist at the Fairbanks Summer Arts Festival, performing a number of concerts and also teaching singing/songwriting workshops from July 14.-30. See more detailed info on the Upcoming Events page. This will be Ann-Marita's first ever Alaskan adventure...!

Following this, Ann-Marita returns to Southern California, for additional shows in the Los Angeles area. (Some recording sessions for the upcoming album as well, but you'll have to wait a little bit longer to hear the result of those.)

If you happen to be in the area of any of these VERY spread-out events, come say hi! (Or if not, tune in to the live stream of the Kulak's Woodshed show in North Hollywood, CA on August 22!)

And if you read Swedish (hey, about 8 million people on the planet do, you might be one of them!) check out a recent, cool review of "The Purple Ribbon Sessions" on Swedish music site Rootsy's "Best right now" page!

Thanks for reading, and have a happy summer, everyone!

Last month, Ann-Marita was lucky enough to be a featured performer at BuzzFeed Open Mic in Hollywood, CA. Her live set got 2,000 views on Facebook the first day it aired. Check it out below!

You can also find some brand new live videos on the YouTube channel, like Ann-Marita's cover of Trisha Yearwood's "Trying To Love You" and a new version of an old favorite; "State Line", from Ann-Marita's 2007 album "Intuition".

That's all for now, folks! Some exciting things in the works, but we can't reveal'em all just yet!

Thanks for spending some time with us! You are all very much appreciated.

Happy New Year to all!

Ann-Marita has been traveling back and forth between California and Sweden this year, performing and working on new material for the upcoming album. Here's a little taste of what's to come, from a recent live performance at Kulak's Woodshed in North Hollywood, California, also featuring guitarist Al Bonhomme.

Ann-Marita's touring plans for 2017 just *might* include some locations she's never visited before, so stay tuned for updates. In the meantime, thank you for your continued support! Peace & joy!

Happy first day of spring, everyone!

In December of 2015, Ann-Marita was cast in a commercial for God Morgon orange juice, playing herself as a Scandinavian expatriate in Los Angeles. Little did she know of the story behind the entire production. (You will have to watch the video to get the full picture.)

The God Morgon film was released on YouTube in March 2016, and currently, it has had more than 1 million views in less than two weeks since its release! The emotion captured on camera is obviously resonating with people all over the world.

It's a new year! Which means a whole new plethora of stuff on the agenda!

First of all, Ann-Marita is headed to the annual NAMM show in Anaheim from Jan. 21-24. This is the place to be for any musical equipment manufacturer, music gear head, music performer and...music anything. Ann-Marita is a proud SHUBB Capos endorsed artist, and will appear at their NAMM show booth at 3 pm Sunday January 24th for a live demonstration.

On February 13th, Ann-Marita will be taking her Scandinavian tribute show to the Sons of Norway monthly dinner party at Norronna Lodge in Van Nuys, CA. If you happen to be a member, you can't miss this one.

And last, but definitely not least, Ann-Marita is one of the opening acts for Dean Sams of country supergroup Lonestar in Long Beach, CA on February 27th. Check out the event on Facebook  and get your tickets!

Apart from that, Ann-Marita is heading into the studio in the coming months. New album coming in 2016! Stay tuned and keep on checking back!

Thank you for the invaluable support!